My pal **** has a daughter getting married, as I have mentioned, who wanted a particular kind of jar for the wedding, where guests could throw money into the big jar then later, once the money is safely in the bank, the jar could sit in the couple's new kitchen, full of Girl Scout cookies. I made this rather superb jar below, and the bride to be noticed it had a SATISFYING resemblence to a famous honey jar....


We were down at the Chapterhouse last night, as you might expect. Twas good times, as you see the wife here making a point to Stevo, and below that, Christi is about to drive to some distant lake for a week or two, and I though she might need a wee little pig sculpture for her mirror...(PIGS: the new fuzzy dice for for your mirror)

And, um, YES, I did carve my name into a table last night AND draw on a lampshade... 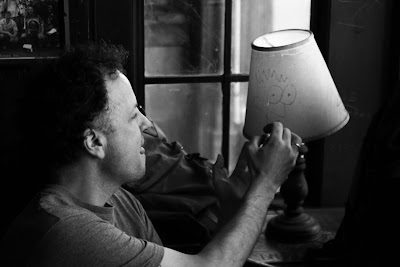 Posted by Gary's third pottery blog at 4:58 AM

The bride's mother LOVES it with capital letters.

That's a cool cookie jar. And it would be even cooler full of money.

Or elephants instead of furry dice!!
Looove the yellow pot!

Does that mean it is no longer the demon lamp?

Y'all are such a hoot! I must find a way to join y'all at the Chapter House!!!

Love the pretty yellow jar...does indeed remind me of a hunny pot. I'm sure the Chapterhouse will one day be marked as a historical place.....