The wife and her classy pal Judy are forming a book group. They decided, not consulting the lone dude in the group, that we would read PERSUASION by Jane Austen. I have picked up Jane before...and set her back down. I was willing to try this book.....but.....after 50 pages, YAWN....I did enjoy that movie last year with Anne Hathaway or whoever, YOUNG JANE AUSTEN or whatever it was, but anyway, here is what I wrote as I set the book aside last night for the mystery I preferred:
NOT MY CUP OF TEA
Where are the thrills, the chills, the murder, the mayhem, the car chases, the car crashes, NAY, where are the vampires, the demons, the wizards, the werewolfs, the goons, the geeks, the broads, the b!tches, the dames? Who cares about his lordship and the various misses and ladies and farmers and their frivolity? So I go back to the crazy thriller byt the author of LA CONFIDETIAL, James Elroy, whose mother was tragically murdered when he was young and whose work promises all the car chases, murders, mayhem and broads a guy could ask for....

(Kasey made me this rather fab picture to show off her mad skillz)
Note: when you don't feel well for a few days, it is hard to do anything, and when you start to feel better, DANG! You feel like you got lucky.
Note, part 2: I put sugar down twice in yesterday's recipe (THANKS FOR NOTHING GEORGES) and have since corrected it
Note, part 3: I still want a MAC, but shoot, it would pretty much cost a sh!tload, and do we wanna do that? This babytop computer is working very well....


Glazing yesterday, this stuff is about 5oo degrees now, headed to 2200 degrees today and out tomorrow. YEow! 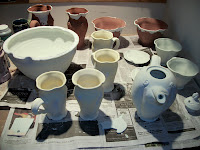 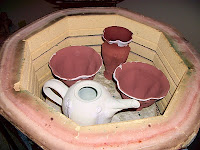 Posted by Gary's third pottery blog at 5:43 AM

Loving seeing "almost baked" stuff! Are there 4 Licorice Black lovelies in that load?

I don't think I could read Jane Austen either..and I am a girl.
Cute artwork!!!!

I've never tried reading any Jane Austen. I just got through reading Carrie Fischer's book "Wishful Drinking" which I LOVED and now I'm reading "Full Frontal Feminism." I'm on a kick ass lady kick after just getting through reading Lone Survivor about a Navy Seal. That was pretty rough stuff.

Boring. Thats what I think about that type of book. I like to read junk.

Save me some mugs Gary!

I love jane austin. And a good whiskey

My first paper at university was on Jane Austin's Emma. I never did finish the book.