My baby blue (sky blue, periwinkle blue???) glaze is known to be pretty, and it looks good with a pink rose, as we have seen.  BUT, I wondered what it would like with a purple rose….and now we know!

Posted by Gary's third pottery blog at 6:38 AM 1 comment:

I have a special 2 month sale going on at a wonderful gallery up the lake, Aurora Art and Design Center….so we delivered the display yesterday.  I tried to submit a little of everything I have been working on lately….the thing is, you fill up the studio to a maddening degree then SUDDENLY it is fall and you are shoving stuff out the door faster than you can replace it :)

Posted by Gary's third pottery blog at 6:10 AM No comments:

not a hipster, a DOGster….

Ignore the news.  Then play dress up with your pets! Penny in her striped hoodie with matching sunglasses….

Posted by Gary's third pottery blog at 6:42 AM 2 comments:

Every September you'll be sitting there on a hot 80 degree day saying "we get snow every october…kinda hard to believe that we will see snow NEXT MONTH".  YES.  Every October of my life I have seen snow…we woke up Thursday to about an inch of the stuff, very pretty on the colored leaves….

Posted by Gary's third pottery blog at 6:32 AM 3 comments:

I am a lazy and well-traveled baseball fan…liking both NY teams AND Toronto because I live between them, we used to live in New England, and yes, we have been to Red Sox games, when I was little we lived near St Louis and I have a Cards hat too, and we even lived near Cleveland and I have been to their games.  BUT…I lived most of my 20s in Chicago, most of that time just a few blocks from Wrigley Field.  (although I went to an equal number of White Sox games and have their jersey too)
At that time, the 80's and 90's, it was just a few bucks a ticket, very affordable--there were even a few times you could turn in 6 candy bar wrappers for a free ticket.

.   The first of their games I attended was at a party on the roof of an apartment building across the street from Wrigley…before those building owners added their bleachers, etc.  When you rode the elevated train you could look in and see the game.  The neighborhood was just that, a regular neighborhood, it just had a very interesting neighbor.  It was very old fashioned, all of it, including the ancient but well kept stadium with ivy on the walls and no lights until the late 80's.

Not long after the wife and I got together I took her to a Cubs game, Mother's Day 1992, isn't she gorgeous?  She is wearing my shirt, which I still wear myself :)

Posted by Gary's third pottery blog at 4:44 AM 6 comments:

…and other new things….

I tried out this mug shape and glaze idea last week and LOVED it so much I am making more…but I kept that first one for myself….

Posted by Gary's third pottery blog at 6:18 AM 1 comment:

You have seen me make a lot of green dragon mugs, but I was thinking of the Welsh flag and its RED dragon and thought I needed to make those too…. 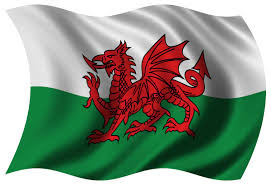 Posted by Gary's third pottery blog at 5:10 AM 3 comments:

driving in a blizzard….

I was dreaming last night that I was in Alaska driving in a blizzard on uncleared roads…often it is the OTHER cars who worry you more than the road or the weather, but it seemed like other drivers were pretty experienced…turns out Alaska blizzards look a lot like our blizzards ;)…then I dreamt we were in our old house and all these distant relatives showed up for a big dinner and I had to wing it, as in, boil some potatoes (which I did until they were a pasty mess) and then get some corn and peppers out of the freezer….it was not gonna be very grand and I was not unhappy to wake up.

In other news, some delightful new pots, out of the kiln…..

Posted by Gary's third pottery blog at 6:48 AM 2 comments:

Having enjoyed weeks of sun and drought and warmth and then great fall colors…well, it had to end, right?  Many if not most of our leaves came down Saturday in a huge 2 day rain storm….but gosh, the colors have been great!  Here is the river behind our house, which is back to normal levels, having been a trickle for months….kind of a relief, since our water comes from our well, which has gone (temporarily) dry in the past….

Posted by Gary's third pottery blog at 6:19 AM 3 comments:

Potters with electric kilns may look at these pictures and wonder how my kiln could work with such a defective and worn out kiln sitter…yes, it was pretty decrepit, but worked OK, although I kept witness cones inside to watch and make sure I was getting where the kiln needed to go…

ANYWAY, it was time.  I am always scared of doing these sorts of repairs, but I have done so many of them successfully and I have the original repair manuals.  This wasn't too bad, just a little messy, and you can see in one of these photos the shiny new replacement tube looks so tidy and fresh, you figure the kiln is good as new, for years to come…. :) Have a great Saturday!

Posted by Gary's third pottery blog at 5:21 AM 3 comments:

OK, people have very CLEAR ideas about what they call a cookie jar…wow.  I can still think of a large jar as a cookie jar, in my own little brain, while simply calling it a LIDDED JAR-because a whole lot of anything, really, can go in there--cookies, coffee, jelly beans, peanuts....  This one just came out of the kiln and looks SMASHING don't you agree?

Posted by Gary's third pottery blog at 4:59 AM 2 comments:

The last few items out of the last kiln firing, the wife really liked the frog mugs.  This baby blue glaze, or sky blue, or as she calls it periwinkle is a good contrast with frog green…

OK, I am gonna admit something to you here:  this has been a nerve-wracking, nail biting election season, right?  You may have noticed I am not around on the computer as much, reading your posts and all…the computer and all its news gets to feel a little intense these days, and I am avoiding it…but all this will change in 2 and a half weeks…. :)

Posted by Gary's third pottery blog at 6:05 AM 4 comments:

Posted by Gary's third pottery blog at 6:28 AM No comments:

ANYWAY I was just telling the wife of the dream I had before waking:  I went to a HS reunion of some kind and ran into (one of many, actually) a girl I had a crush on.  We were chatting (of course, she looked like my last memory of her, which would be around 1980) and then my wife walked up and this old school crush said "Oh WOW".

Yes, my wife is pretty breathtaking indeed :)  (and of course I looked up that ancient crush on FB and found her easily enough, and she looks quite the same herself, how about that? :)

ANYWAY, a customer last week bought my last wee little elephant muffin plate/soap dish.  She got one of these mugs, too, which I seem to sell nearly every day (I make a lot of those mugs, to be honest….) as a pairing---what a great idea, elephant mug and plate!

Posted by Gary's third pottery blog at 6:28 AM 2 comments:

I was making a couple of larger jars during my open studio a week ago, now out of the glaze firing.  I don't make many big pieces, not because I can't but because, I dunno, I am a small person??? Anyway, visitors like to see you make big things, right?  So I did, and they are, to me, cookie jars, but Amy and Dave were visiting and were like "those aren't BIG ENOUGH!" and hold out their hands for the imaginary plate size cookies they prefer, and I have to admit, it would be hard to fit PLATE SIZED COOKIES into them, but most others would fit just fine… :)

Posted by Gary's third pottery blog at 4:44 AM 1 comment:

Almost 30 years ago I went to Heron Hill winery on Keuka Lake…30 years!  WELL, with colors BRIGHT, we went to 50 some miles over there on Sunday, and visited another favorite near Heron Hill, Dr. Konstantin Frank's winery, a family of winemakers making a huge range of prize winning wines…but dang, the views from those hills, down grape covered slopes to the big Y-shaped lake…

First we had gone to Keuka Lake State Park, maybe one of NY's prettiest….what a glorious awesome day :)

Posted by Gary's third pottery blog at 4:59 AM 3 comments:

As luck would have it, I made a fourth bowl for a set of 3 pictured a day or 2 ago.  BUT BEFORE it came out of the kiln, based on the posted picture, a friend in California wanted the 3 and was even happier with a 4th…
as I said, the fisherman tosses out the hook and bait and waits to see if anybody is biting ;) But now I need to make another 4 like them because they are COOL :)

Posted by Gary's third pottery blog at 6:04 AM 2 comments:

Some pots I have made lately…you have seen this wavy groovy blue and white with a shell thing before….but the green bowl I made just because it might be fun to put texture on the inside of a bowl too, right?  And the teapot below, an unusual thing:  I told you a week or 2 ago I had dreamt a teapot…well, I got up and made it :)

You may need a dragon mug, right?  Available now at my Etsy shoppe! 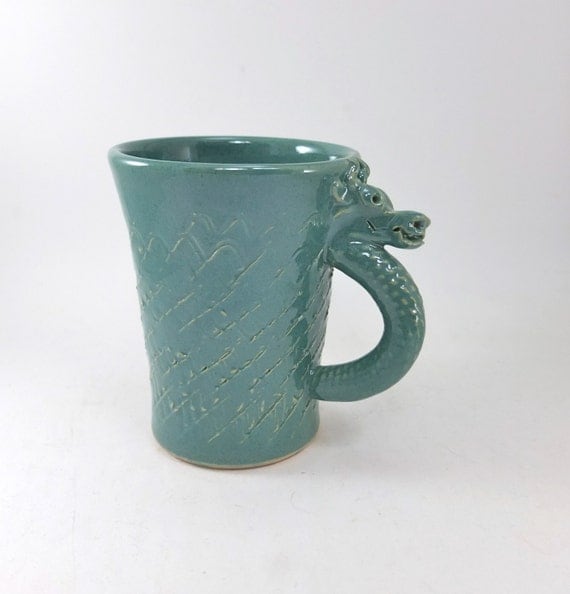 Posted by Gary's third pottery blog at 5:53 AM 3 comments: