BUSTER the black lab and why I put animals onto pottery 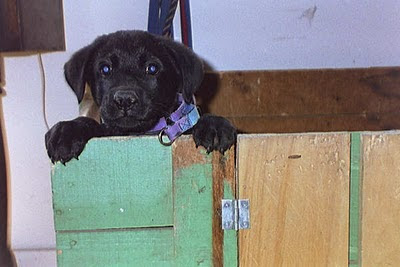 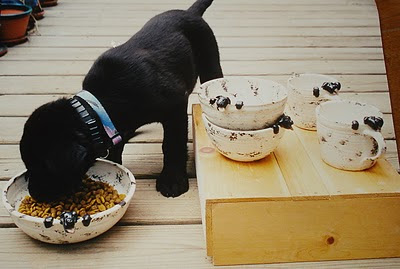 (Buster in 1999)
You can see Buster now, age 11 today, around 120 pounds more or less. Above you see him as a puppy when he was the size of a boot. He is the most cheerful and sweet natured and well-behaved dog on earth (Penny is all that too, except for the well-behaved part :) and Buster has, as many dogs do, a sad background.

On my birthday in April of 1999 we were driving past a neighbor's house in New Hampshire and there was a card in a tree saying PUPPY FOR SALE and a girl sitting in the yard playing with a little lab puppy.
Turns out they were taking care of Buster for another friend, and 2 days before the girl was practicing driving in the driveway and Buster was attacked by the family goat and Buster was chased into the car's path. He sustained a broken leg and concussion. The family, although quite well-to-do, took him to the vet but refused treatment for him, saying they would either sell him or have him put to sleep rather than treated. MESSED UP thinking, but we took him.

We already had 2 dogs, and our older lab Jack bit Buster badly on the nose, but they became the best of friends.
Our vet got the x-rays of Buster's back leg and told us he would be FINE. And he was fine. He was very easy to raise as a puppy because he had our other 2 dogs, plus he is just a quiet and sweet dog.
He had a play pen in the living room and as he grew and his leg healed, one day, as you see in this pic, he hopped up to look out and see what we were doing and we were overjoyed--his leg was in good shape, he would be OK, and it GOT ME THINKING.
I had made pottery at that point over 15 years but had never done any sculpting, but it looked cute, him hanging on the edge, and I thought it would be neat on a bowl. As you see in the other pic, I figured out how to make a dog hanging over the edge, and Buster really PAID FOR HIMSELF that summer. All these pots had these pictures and this story attached and sold like hot cakes.
I started fiddling around and developed up to 2 dozen or maore different sculpted animals like the pigs and cows and all and a million glaze styles to with them, all thanks to Buster.
So as I say, he turns 11 today, and up to this past week he has been in superb health, trim, athletic, doing what he wants. The same leg has bothered him this week and he vomited several times yesterday and today,and I am babying him.
Happy birthday Buster.
Posted by Gary's third pottery blog at 4:06 PM

aw, Happy Birthday Buster! what a wonderful story Gary, thanks. The pictures are adorable. Give him a big pet and an extra treat from me :)

What a wonderful story, Gary, and lucky, lucky Buster! And the most powerful BOO -- HISSSS anyone can make to the ingrates who refused him treatment. Shame on THEM! And, thank heaven, big time, for folks like YOU!

Happy Birthday, Buster! He's so super cute. I love dogs... how could anyone not?

Happy birthday, Buster! I'm sorry your leg has been sore--feel better soon. I love the story of how you influenced your person to change his pottery!

It was fate....you driving by and seeing him in the yard. Lucky fate.
I hope he feels better...maybe he ate some bad snow?
Let us know.

We have been thinking its all these Iams treats he was eating. This afternoon: no treats, no vomit :)

Buster is great, and very friendly and sweet!! Tank is the Chuck Norris of dogs.

Buster was a lucky dog when you took him home. Get well soon Buster!

Happy Birthday Buster! Glad he stopped vomitting, it sucks to be a sick puppy.

Happy Birthday Buster! Such a sweet puppy. I hope he feels better soon.

Happy Birthday Buster! What a lucky dog to have someone like you come along and give him a wonderful
life!

Bit late to the party, but Happy Birthday big guy! Glad I was finally able to give you an ear scratch in person.

Gary, you should post a picture of your animals along the window in the studio. Very cute, that.

Oh good furry friend, Buster. I hope he's feeling better! We still haven't gotten over losing our last dog , and I don't know at this point if we're going to...but then I read something like this, and realize that if I wait to get over being sad, every day there's somebody furry who could probably really use for me to get the heck over it. Good reminder.

Yeah, people break my heart a lot more than animals ever have.

Sweet Buster!! Happy Birthday a day late pal!! You have the best owners ever, but you know that already right!