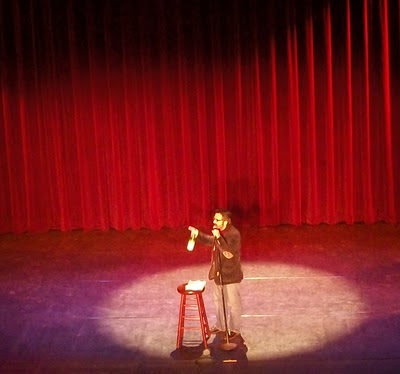 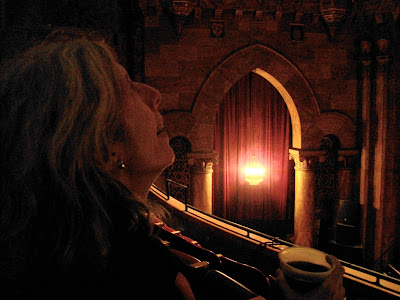 (above, the wife, below, Marc Maron getting ready for the night) 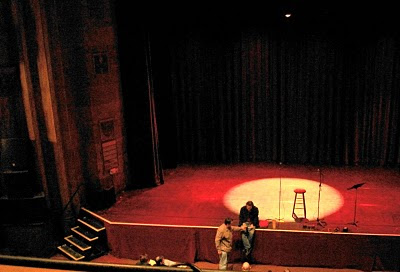 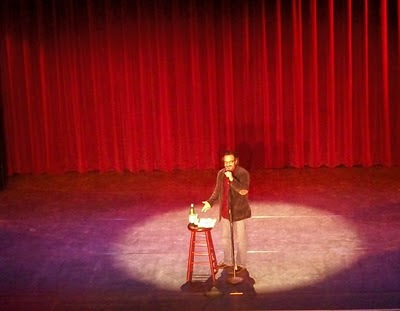 The story goes something like this, and it is a very hard story to believe, but everything here is totally true:
2-3 weeks ago Kasey is like:
"Scott and I are going up to Minneapolis for Valentine's weekend to see his buddy the comic Marc Maron perform with Eugene Mirman from Flight of the Conchords" and I am like checking the links and say
"OH! Wicked funny dude...biting, inciteful, HE IS MAD AT THE THINGS WE ARE MAD ABOUT" and Kasey is like
"We are gonna give him gifts! He loves cats, he loves baked goods. I'll bake him cookies, but I am gonna buy your cat bowl to put them in!" and she does.

Last week, Kasey and Scott go to Mall of America, enjoy the show, and are hanging around with Marc after the show and she hands over my cat bowl and the baked goods and says
"You love cats and baked goods, here ya go!" and he enfolds her in a big hug he is so happy, even though he is a famous dude and she is super sick with a cold. SO, Marc Maron has my cat bowl! (Kasey, he does not seem to have caught your cold)

Monday, Kasey sends me more links and all to check out. I am listening to the radio which tells me: MARC AND EUGENE's NEXT STOP IS ITHACA. HERE! How cool is that? What a coincidence. I go down to the State Theater, a super old and super cool 80-90 year old theater with the ceiling painting like the sky and the rest like a palace, and I buy 2 balcony seats. I find out, for example, that I saved several bucks by buying tix in person rather than online....anyway!

SO, last night, me and the wife are headed out for the big date. It is nearly her birthday. I know one of the ushers at the theater, and I swear I am not making this up, and my FB friends will laugh when they see this:
The usher sees me and is like
"G BOMB!!!!" and then
"HIGH FIVE FRIDAY!!!!!!!" with appropriate hand slaps all around.

Thankfully, the State theater is a grown up place and they sell beers. We get the beers and head up to the balcony with the other lowlifes who like to sit up in the balcony with their beers and party and call down mayhem on everybody below...and who is on the stage, half an hour early? With his coffee and sandwich, talking to everybody? The star: Marc is out chatting with everybody, and later he worked it into his show, abusing and heckling the members of the audience, such as the dude who said he loved the pod casts and Marc's humor but his wife hates it....and here is his wife. The guy happens to be a fruitfly scientist. I think Marc had a good half hour's worth of new material thanks to fruit fly guy.

ANYWAY, so we are sliding into the balcony, and Marc is right under us on stage, yelling at the guy next to us "WHY ARE YOU SITTING UP THERE? You'll be all alone" and I call down "We're up here too!" and Marc asks me "Why are you up there with him?" and I am like "So we can look down on you and hurl abuse at you!" and he seemed to realize that made sense and so I further holler "Kasey brought you my cat bowl in Minnesota!" and he is like "Oh man, Minnesota...."

The evening staerted with a young comic from Brooklyn named Kurt then Eugene Mirman who is wicked silly. Both guys were so funny I was laughing so hard I could hardly breathe (TRUE! I have asthma, sometimes you laugh so hard...anyway...I was fine). Then there was intermission, and Marc was expected to come on for 45-60 minutes. By my clock, he went TWO HOURS AND NINE MINUTES. The other comics literally dragged him off the stage! But then, of course, he just sat down and started talking with anybody from the audience who was still around....

Anyway, like I say, he is mad about the stuff I am mad about, plus he is intense and neurotic and smart and quick and funny. Dig his podcasts to find out more....


I get outta bed this morning and the kiln has cooled off from yesterday and I pop it open and lookit this thing, YOWZAA! I lovvvvvvvvvvvvves it! So I had to toss that in here....

(teapot by Gary Rith)
Posted by Gary's third pottery blog at 8:23 AM

Sounds like you had a great evening. I hope the guy knew what you meant about the cat bowl.

The teapot is a beauty. It almost looks like carved wood.

Not MY cat bowl!

"Kasey brought you my cat bowl in Minnesota!"

I'm sure that gets yelled out at every performance.

That teapot is gorgeous!!

I wish I'd gone to see this show- I started following both these guys on Twitter and they crack me up. But I've been disgustingly sick and didn't feel I should leave the house & be around respectable people. Damn you, cold germs!

I'm so crazy happy you guys went! The Maron Miracle indeed! He is awesome.
I love that you yelled out about the cat bowl! Gosh. You guys are great. I knew you would dig him. You're a WTFer now!

The State Theater is great! I'm glad you guys had a great time.