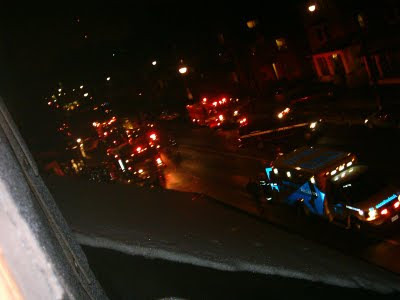 Havn't heard much from Celeste and Maurice lately, have we? You will recall my Canadian friends Celeste and Maurice?
There was that party in Vermont 3 years ago. The charges were dropped.
There was their visit here a year and a half ago. The state police were called....
And, thankfully for America, since Maurice has subsequently been legally BANNED, I mean it, BANNED from entering the US anytime soon (I am really not kidding about this) we met up with them on their side of the border, as you will recall, in Niagara, Canada last June.
Look what happened last night with what they are claiming was MICROWAVE POPCORN. They tell me, and I swear I am not making this up, that they had planned to move out of that apartment this week anyway.

In other news, I dreamt I flew to Ireland to visit their warm beaches and there were little puppies who were cute but headless, because they grow their heads later.......

Posted by Gary's third pottery blog at 6:11 AM

You keep such interesting company.. especially in your dream. :)

Gotta watch that microwave popcorn... Our microwave is so old, you have to stand there and babysit it, because it won't shut off on it's own, thus potentially creating a scene.

why are my friends so disreputible?

My microwave did what Becky Jo's did. it was the microwave that wouldn't DIE.

Susan as Herself said...

Well, I sure am glad that the puppies were gonna grow their heads back!
But, how horrible to see them without them! Hope your dreams tonight are much better!

One of these days I've got to meet this couple!

celeste must have been in her usual drunken stupor.