So as I was showing you yesterday, I need a display TODAY for a new gallery (more on that later) and I need the display now. Last night I had a wee drinkie poo and went down to the basement after dinner to finish it. At the suggestion of my crafty wife, I had taken old wooden wine crates and bolted them together into this space age configuration, then painted the whole mess with leftover paint from our house- which is purple with wasabi green accents. I was low on purple, but had a lot of wasabi green, and that makes up most of the display, with 2 purple shelves. Looks smashing, I think. At the top I had made an elephant to hold my name like a flag and a pig to hold my business cards, both of which have holes under so they can be screwed. Onto the shelf. Ahem.
There was also a knothole, and the missus suggested a clever little way to stuff it would be add a crabby clam....
the missus also noticed, ahem, that the, um, paint is still, you know, a little wet but I am loading and delivering it shortly....and I will get shots of it filled and displayed later. 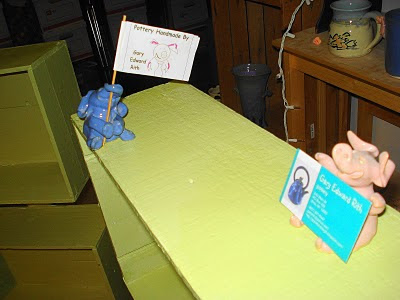 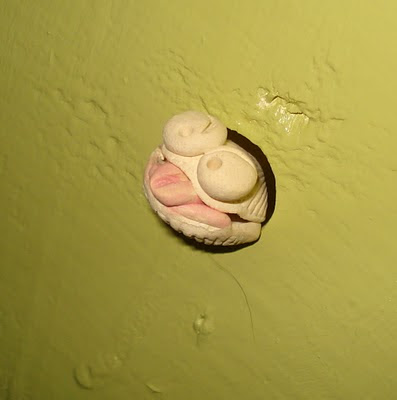 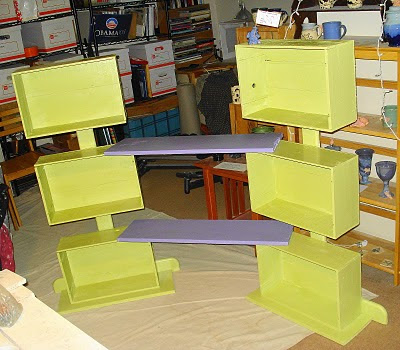 Posted by Gary's third pottery blog at 6:27 AM

Amazing use of what you had on hand, Gary. What new gallery? I will need to visit.

very retro Geroge Jetson!
Love the wild colors, they will go well with your pots.

Have fun in Aurora, and good luck!

what an awesome and unique display. it will certainly attract customers.

That is a VERY nice display. I was thinking of building my crates, but I might go to town and visit the World Market, as they sell mass quantities of wine and might have some crates for sale. :)

the configuration reminds me of a flow chart! As much as I love visiting my hardware store, it's very satisfying to use cans of paint that you have on hand.

Love the band, I'll have to check them out. Great riffs on that intro.

amigo... you always make it out that you're not so "handy" but that display begs to differ. looks great!

This is so great..and also so GREEN... In color and concept.

Nicely done! I would totally put that in a bedroom in my house. Baby room perhaps?

yeah man, awesome display dude! maybe you should have some sushi available because of all the wasabi though. wheres the new display going?

Freaking gorgeous! I LOVE that color...in fact, my table is the same shade!

Fun stuff. Your wife is very creative and clever. You should ALWAYS listen to her.