Wallace and Gromit, Brown Betty and beans on toast....

(teapots by Gary Rith)
Brown Betty is the most easily recognized teapot on earth...with good reason!  Just a pleasant and useful, pleasing fat round shape.  As a person who slurps a lot of tea, the color brown is VERY useful when you are not, um, really strict about scrubbing your teapot like surgical nurse:  making tea always creates a stain, right?  You scrub hard or soak with vinegar from time to time...no worries if your teapot is already tea colored!!!!

The Brown Betty IS England.  It is tea!  Teapots are also the one pottery item most often made fanciful, the opposite of the Brown Betty, thanks to Alice and her mad teaparty...
LC wrote from Nova Scotia, which is halfway to England, wanting a simple green teapot of the large size.  I told her it needed groovy decoration, and made 2 really big ones.  The one in front is hers (note:  can you guess what it costs to ship this to Canada???? 37 bucks, thank you very much, with rates rising Monday...).

ANYWAY, this all got me thinking about other subjects, like Burgess.  Day one of college my freshman suite had my roomie Scott who although Jewish dressed like a priest (not as psycho as he seemed then...he later became a family man trying to sell mortgages) and next door was Alex who became a best friend and later a doctor and next to that was Denis, still my best friend rooming with Marcelo the Brazilian nudist poet (you can't make this sh!t up..my Bennington College is famously filled with avant garde students:  Bret Easton Ellis wrote LESS THAN ZERO while he was a student at Bennington, for example, plus we had Jonathan Lethem and Donna Tart at the same time ). Saucy sexpots Joanna and Nora were down the hall and will be reading this today (actually, nearly all the people mentioned here will be reading this today).... and just about all the people in my freshman suite REMAIN BEST FRIENDS, 30 plus years, since I was 17!
Burgess was next door.  I met him when he came over and asked in a plummy English accent "do you have any cellotape?" and Scott and I stared at him wondering what planet he came from and what he had just asked for.  England is just like the US, except filled with cute little expressions and names for things like BEANS ON TOAST, Brown Betty, cello tape and Margaret Thatcher...

AND ALSO the home of Wallace and Gromit.  Oh gosh, I LOVE those movies, and anything else Ardmore has done and I know you do too....have a look at Gromit and the tea below...I don't have to explain why he is my hero! 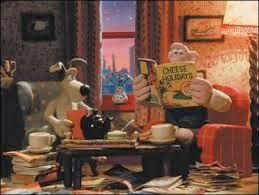 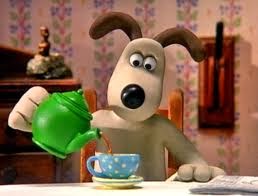 Posted by Gary's third pottery blog at 4:26 AM

Of course, the down the hall list wouldn't be complete without Judy...nor the Countess...nor the future soap opera actor...nor... Gawd, we were an eclectic bunch!

I have a customer who collects tea pots and has requested some custom made ones. He likes the insides to be glazed white so he can look inside and know when his tea has steeped enough. Different strokes...

We luff them here, too. "Cheese, Gromit!" (even with the little fisty waving hands)

You had an amazing college experience from the sound of it!

We have the Brown Betty (two I think) plus a little yellow cute one and a nice blue one we call Robert. Robert was a team effort with a potter/teacher and me. He did the good stuff on that one. Love the Wallace and Gromit figures!

I totally forgot about the Latin American naturalist! He made using the co-ed bathrooms a real adventure. My favorite Burgess story: Asking if he was attending the foreign students dinner I was met with a quizzical stare: "I'm not a foreigner, I'm British!"

"Small Town Me" led me here, and this time around I have to comment because I live just up RT 7 from Bennington and the college! Always cool when I find someone who actually knows of the area.

Your work is beautiful and it sounds like you have fun creating it!

Denis, darling, it's been much too long! Forgive me yet? Call me. Miss you!