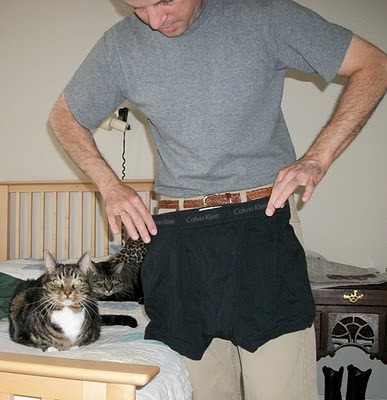 OK, as you keep hearing me say, I am writing for a women's megablog called SHE SAYS by the ladies (and Gary). I am the adored (or a at least tolerated) little brother hanging around the slumber party.
Many of the interviewees here will be familiar to you....

OK, this all started Monday in the late afternoon. At lunchtime, I accidentally squeeze out bean glop from the back end of my burrito, onto the pants, the shirt, but with a helpful lick from the dog, I figured GOOD ENOUGH. Remember, I am a POTTER, an ANARCHO-PUNK, and maybe I have a high tolerance for crapola on my clothes. Or maybe 13 years of being a househusband has made me a slob. MORE of a slob. I mean, if you aren't going out into public, then....?
But like I started to say, Monday afternoon I want to GO OUT OF THE HOUSE, get the wife, drink beer and play pool. There are, um, people of my aquaintance who are basically, really, hobos. A little less than clean and sweet smelling. I DO NOT want to join them down in the dumpsters, nor do I want people thinking I need to be hosed down.
I go to the closet, fetch a clean pair of tan pants and grey tee identical to the grey tee and tan pants already on. I get on these kicks. One week, I wear all my Felix the cat tees. Next week, all my punk, Sonic Youth, Ramones tees. Its a grey-tan week. Anyway, I pull off the old, and see myself in the mirror and I am like

"I HATE THESE UNDERPANTS"

I got several pairs of undies back in 1996 and have not thought about it since. Sure, you have holes and rips, but who is looking at my undies? My wife is too polite to say anything (GOD I LOVE HER) but the fact is, these undies go back to Clinton vs. Dole. Shoot....

I go to an expert. (some names have been changed here to protect the innocent and the GUILTY) My friend Bob is perhaps the most handsome man on earth. He is totally sweet natured and loveable, and we have discussed this underwear thing many times. Additionally, I get the feeling he CARES, or at least has noticed, what his undies look like. I was talking to Marie at the store the other day about Bob, and Marie is like "Leslie told me that every woman in Ithaca has slept with BOB! Except me." I am thinking Bob is pretty expert on undies, and he puts it simply:

OK, the theory behind briefs is this: they hold stuff IN PLACE so you are not flopping about loosely, like those Greek Olympians painted on statues 2000 years ago. The theory behind boxers is....I have no idea. And don't Mormons and the Amish wear....?

I decide to put the question to my posse, my gang, my BAMF expert panel of women, and they DO NOT disappoint:

Gary
Hey, Boxers vs. Briefs, and YOU WILL be quoted:

Jill
Definitely boxers over briefs. There is NO question. ANY man looks better in boxers... do I need to make a reference regarding banana hammocks on the beach??? I think not..... Additionally, scientific studies have shown that boxers are healthier for men. So if it's not for looks, lets at least wear boxers for your health! Go Boxers! ;)

Lizzie
hmm, I'm with Jill on this one. Boxers are definitely more appealing, in every way. I think men who wear boxers are intrinsically more relaxed and confident. Tighty whitey's seem to restrict personality as well as, well you know, other things.lol

Becky Jo
If I have to make a decision, I vote boxers... or well, commando isn't a bad choice either. ;D

Gary
Becky Jo, remember the zippers and the delicate parts!!!!

Kasey
If you're wearing jogging shorts or anything of that nature then FOR THE LOVE OF GOD put on some briefs. We don't need to see that thing flopping around in your shorts. Get it under control.
The rest of the time, I'm a boxer briefs sort of gal. They offer support and leave a bit to the imagination.
It seems a lot of gay men are into briefs. I did live above a gay underwear store so I feel I have a bit of knowledge on the subject. When it first opened I took my parents in there during a neighborhood event. Before we entered my Dad asked, "What makes these gay underwear?" We got in and I said, "Would you wear these?".
This isn't part of the question, but I'd like to say. The thought of a man not wearing underwear under jeans skeeves me out. That's a rash waiting to happen.


Gary
I think the whole gay briefs thing goes back to Marky Mark. Straight men are a lot more into comfort than gay men, and straight men are slobs, never caring what we look like :)
Thank YOU LADIES!

Becky Jo
Kasey, ya know how you can tell that they are undies for gay men? Every single guy in those ads has NO HAIR. I don't know about all the other straight guys out there, but MY husband is NOT shaving his legs... or any other parts of his body that are not his face. **EEK** ;)

Kasey
Perhaps other men are more impressed by ridiculous underpants than women are. Cuz I know if Scott came home in some underpants that said "firefighter" on them I would laugh him out of the room.

Gary
I get it---sort of doubly arousing, eh? The thought of a hunky FIREMAN plus also the Freudian thing about fire hoses representing..... On Valentine's, I swear I am not making this up, I took a sharpie and drew a well-placed elephant onto one of my elderly pairs of undies. The wife laughed....

Maureen
Well, my thoughts are more in the lines of function vs. Art. I think for function boxers are more practical, however, they come in an array of design motifs that I find amusing, i.e., my husband George's boxers: black with large red women's lips on them, or the one's with smiley faces, or the Sci-fi glow in the darks. Boxer's definitely if a man is in a hurry... , to do manly things. Now if one wants to be "Hot" then briefs are the ticket, when George wears his "tighty whities", now that makes my heart go a flutter. They too come in stunning colors, and styles, I guess it boils down to the ultimate question, "Are you wearing them for speed, and comfort, or are you just trying to be hot and cool looking?
George loves when I wear my Victoria's Secret underwear, but after a while, I say "Ugh, can't wait to get this crap off"! lol lol lol Oh, I hate men who wear speedos or thongs...not impressed. Just think they look dorkey, and overstated...:)

Gary
GLOW IN THE DARK?

But, really, enough of my bawdy friends, what does the wife say?

Gary Edward Rith is a househusband, full-time studio potter and sculptor and part-time instructor at the Cornell University Pot Shop. Confessions of a Kept Man appears every Tuesday and Thursday, and Gary's answer column "He Says: ask a guy, by Gary" appears every Wednesday. Gary blogs a whole lot of pottery and other baloney at his blog
http://garysthirdpotteryblog.blogspot.com/

SO, she see the pic below and is like "I dunno, looks like NEON YELLOW to me". Trust me. Same buttery yellow, Susan, BAD pic. And some of you may remember the "LIfe is just a bowl of cherries" thing reversed and funny as "life is just a chair of bowlies".... 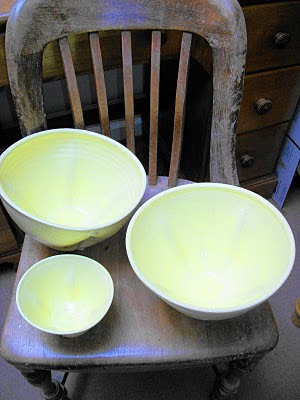 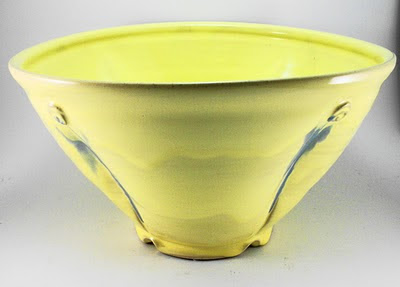 Posted by Gary's third pottery blog at 6:09 AM

Note to self... I have GOT to remember that there's a good chance I'll be quoted on this site!!!

I am laughing so hard! Worse, I can pick out who is who in the names are changed story.

Hope you figured it all out, Gary. I have to say, boxer briefs or nothing at all in the summer.

lol!I love being a panelist.

If I might add....boxer briefs please! Tighty whities are just so..so..schoolboyish or something. And no thongs, gross.

This reminds me of when my mom bought my dad special fancy silk boxers for a christmas gift. She didn't realize the significance of the fact that the pattern on them was the NUTCRACKER. My dad never could bring himself to wear them.

I'm still voting commando.. just be careful with the zipper. ;)

Boxer briefs. They keeps things under control and Bridget approves of the view from behind. ;-)

This is quite the discussion...no commando?

I think boxer briefs are the crowd favorite.

The boxer briefs are a nice compromise.

No ... one of your friends will know for sure. He is the most handsome man in the world. I, like ... almost faint when you post pictures of him ... and I'm a respectable woman. To protect the innocent, and make me seem less stalkerish, I will not write his name but he will know. He will know for certain sure.