the guy tells me "don't kill yourself"

We woke up Friday morning and the well pump had a problem and we did not have any water. The soft water guy had been here Wednesday and warned us the well pump was dying. But he does NOT do well stuff. Anyway, I called the well guys who came over late Friday morning. I did not know much about wells or my well before, that has changed.
Our house is 145 years old. There was a well pump motor in our basement with 2 pipes going through the wall to a small addition built onto the house 70 years ago. Our basement is dry and full height, the addition is over a crawl space. I had never been in there. Me and the well guys went in there to find where the pipes went, presumably down a hole. The photo below of all that mess shows the crawl space.
The well guys found a plastic bucket covered our well head. They warned me I might have a dry welll and then I would be F##KED. There is an addition over my well! You cannot work on a well like that. Sigh. But I need water....
I did not think it likely we would be dry. Ithaca is impossibly wet year 'round, and we have a river running through our back yard. The guys say that doesn't have anything to do with it. There is a lot to learn about wells isn't there?
Anyway, they cut my pipes and we haul them out. The well turns out to be a standard metal pipe 5-6 inches wide, going down 57 feet. We have plenty of water starting at 26 feet. That is super good news: PLENTY OF WATER. But obviously it means the well pump and motor, as we had been warned, was dying.
OK, anyway, the well pipes and all, at the top, were all jerry rigged and stupid, and there was a massive accumpulation of junk and several feet of dirt around the top of the well. In order to put in a new pump, new lines down the well to the pump, in order to be legal and decent it needed a new well head. The well guys are like "you gotta dig down several feet to that spot, move all this out of the way, so that on Monday we can come back and work. We don't dig that stuff out. We got another well to work on today." and one of them says, a kindly grandfather type "but don't kill yourself!". He meant, of course, do the job but don't get hurt, not worth it.
I am sure you noticed that: it is Friday morning and I have no water until Monday.
I go to the neighbors and haul ten gallons of water back to our house. It is remarkable how fast you use water. I will need at least ten more gallons today. I think we outta go swimming. With soap!
OK, so after I have the water, I grab the camera, the shovels, and put on clothes I figure I could burn if needed. I go under the addition and start shoveling down to the original well head, as instructed.
I am hoping for BURIED GOLD COINS, but creepily, maybe not surprisingly, I find 3 human looking bones. I am wondering if somebody got tired of grandpa way back when, chopped him to bits and buried him under the new addition? Forgot to get pics of the bones, but I will try later....
Anyway, I turn up occaisional rotten wood pieces. DANGER WILL ROBONSON!
Just as I finish clearing down to the top of the well head pipe, as instructed, MY BOOT, and ME, FALL THROUGH TO NOTHING! You see it in the pic here. I cursed like a sailor, stopped my fall and climbed out.
You can see in the pic: apparently 145 years ago, in what would have been the house's side yard, they hand dug a well a few feet wide. Obviously later, they put pipe down the center of the hand dug well and a wooden cover over the top, which had become buried with dirt and junk----well, move ahead 70 or so years, I am digging along, and break into the old well by accident.
I remember seeing Lassie years ago--Timmy falls into an old well. Tis a nightmare of mine, really, and if you wonder why I work out and do a lot of chin ups, as I tell the wife, I want to be able to lift myself out of a hole. Friday I almost had to lift myself out of a hole.
OK, no harm done. But I was done for the day, cleaned myself up with a rigged shower, and took my laundry down to the apartments on the corner...and missed my first Friday happy hour in over a year. Good thing we had gone out last Monday.... 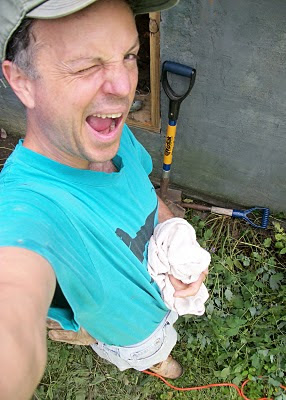 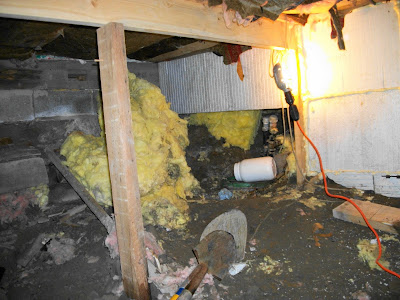 An ugly place to spend the day.
And here you can see where I started to fall into the original well...... 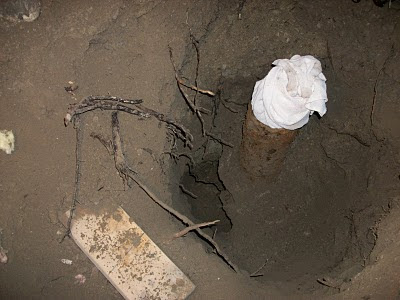 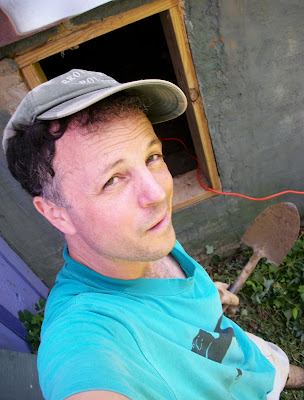 Posted by Gary's third pottery blog at 5:23 AM

Oh My GAWD. Gary, that is horrible. I hate hate hate digging holes... when I worked for a construction company, we had to 'locate' pipes and underground wires before we could dig and I had to locate a pipe with my a$$ hanging out into SE 14th St. on the south side of DM (VERY busy street).... did I mention that I hate digging holes? I'm glad you're ok and you didn't fall into a well. :|

really- don't kill yourself!
this is a "life gets in the way" time for you- hope you are back to your Friday night life soon!

Our house here had an old well with an underground well room on the outside of the house. It is about 8' square and 8' deep, cinderblock walls and gravel floor. It also had a timber roof covered with dirt that collapsed one day and I was walking by. Fun! Meantime, we had a concrete roof poured. Pump died later and we just took out the whole tank and everything. But we also have city water. Yea!
Then, pump died on our irrigation well in Naples. $800. later, we have a new pump. Isn't it fun?

Well, we did our best to carry on at Chapter House without you. Had a grand time but nothing as dangerous as well digging.

This well issue is why I do not have a paved driveway. Guess where my well is?

Greg and I are moving to Charlottesville and looking at houses TODAY. This is a timely story,which will keep me in the mode of CITY WATER and NO WELLS! I know you are looking forward to a REAL shower!

SHEESH! What a messy rotten job! Where was Georges to lend a hand??

Whoa! Possible human remains and a near death experience...sounds like quite the adventure.

Gosh, be careful with that doing that stuff...you can be killed! Our well is in front of our house, and is 273 feet deep. The well pump is located at 120 feet down. There is no way we can do our own. The bones sound really interesting. You never know...!!!
:)

wow, our well is only six or so feet deep, and I believe the pump is in the cute little sheddy type thing near the cold frames. Please be careful, we don't want you to hurt yourself.

"Wells?" ... the guy from California scratches his head. ... When you said you were gonna be with no water for 2 days, I thought, "Call the water company."

Mmmm Hmmm - We understand all to well(no pun intended)your dilemma! Our pump kicked the bucket in the middle of winter one year. It's in our front yard with a cement riser over it. $700 later...

We had a hose hooked up from the neighbors house(their outside faucet) to our holding tank in the basement for the weekend so at least we could shower.

Oh Gary. Be careful. What a gross thing to have to do on a Friday. Ick!
At least the neighbors are gone!

Good gawd.....what a mess. I do hope that Penny would have run for help if you had fallen into the well...I remember when Timmy fell into the well...Where was Lassie when you needed her?? You deserve to have a double Chapterhouse bar adventure next week!!

I remember when we lived in Ithaca, all these very famous visiting professors were renting houses from other professors, and there were constant well-water problems. I think when we were there some very famous lit-crit scholar was without running water for about 2 weeks. Wish i could remember who it was, but he would just deconstruct this story anyway.

WHOA!! This is waaaaay beyond camping w/o water!

Aaah, the joys of living on a city water main--I don't think about that nearly often enough!