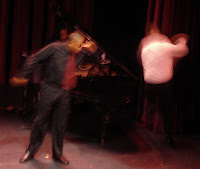 (Corey and Sarah down a few seats from us in the balcony, and other shots around Ithaca's State Theater)
Me and the wife went to the Ithaca State Theater last night to see Second City. I told the wife later "we have done a lot of fun things in our 20 years together, maybe that was the MOST FUN???"...although flying kites last Saturday was pretty damn good and....well, anyway, she and I have a lot of fun.
Me and the wife lived in Chicago for many years and had been to the original Second City theater. I saw Mike Meyers and Chris Farley performing there live, long before SNL...Wayne's World...Tommy Boy....anybody going to Chicago would love the experience. The thing about Saturday Night Live is, well, basically it is hit or miss, with a lot of miss since the earlier days of the show, and I think part of that is the prep: they get the show together in less than a week. Second City on the other hand does some brilliant improv, but most of the show, THANK GOD, is very well scripted and well practiced. AND hilarious! I was laughing so hard I was crying! You see awesome Corey and Sarah had left the baby at home and came along too ...you see were all up in the balcony with the other bad kids....
I only got one live photo before the usher yelled at me to put the camera away....
Posted by Gary's third pottery blog at 7:57 AM

amigo, i'm so envious. i could use some good improv

I listened to Jimmy Fallon on Terry Gross the other day. He was hilarious. He talked about purchasing a pack of gum and recieved back a recipt that was about 2 yards long with coups on it and all kinds of computer data. I got one yesterday very similar for a pint of sour cream at Tops.