have you seen the little piggies....

I was out walking with Nook in downtown Ithaca yesterday...he has nothing to do with piggies, but isn't he handsome and aren't the falls terrific????

SO, as you know all too well it was my birthday a month ago.  I went to the kitchen store and got a kickass apple corer, very high tech (and SWISS! I think) and gave it to the wife to give to ME so I could make little apple-bagel snacks.

Yesterday, I took it to eleven, quite piggy of me:  what if the hole was filled with a raspberry?  BRILLIANT!  I mean, raspberry jam tastes great on peanut butter, right?  Naturally this beautiful little pig out would taste even better...

Speaking of little piggies, you may need a small wall piece with pigs, maybe even for MOTHER'S DAY! A pig in a blanket! I love pigs and I love jokes, I love mother and child or Madonna and child art, and this is a little of all of those, for sale now at my etsy gallery! 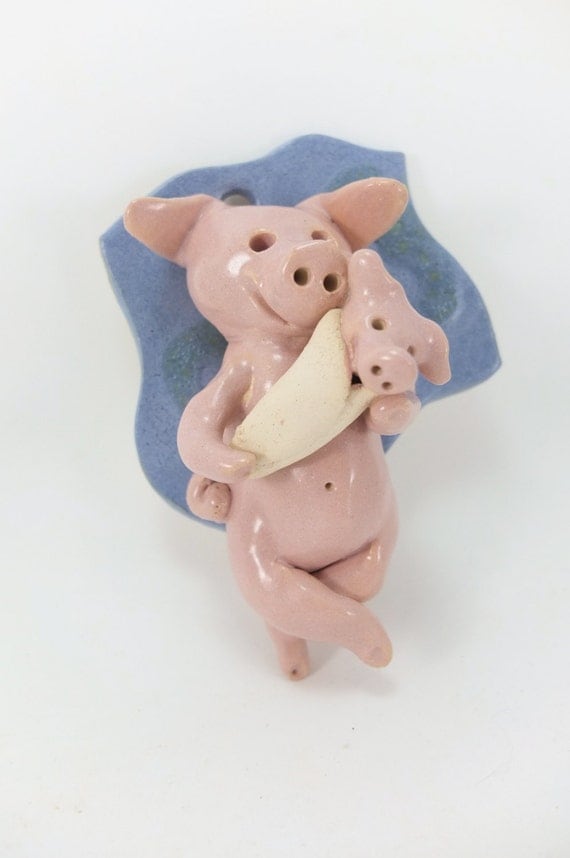 by Anonymous
It was the first of May
A lovely warm spring day
I was strolling down the street in drunken pride,
But my knees were all a-flutter,
And I landed in the gutter
And a pig came up and lay down by my side.

Yes, I lay there in the gutter
Thinking thoughts I could not utter
When a lady passing by did softly say
'You can tell a man who boozes
By the company he chooses' — And the pig got up and slowly walked away.
"The Pig" by Anonymous. Public domain.
Posted by Gary's third pottery blog at 4:51 AM

What amazing falls to be right in a city. Ours are all out in the woods.

Your little pig is so sweet and the poem is so funny. Thanks for the smiles.

oh thank you for my morning giggle....you are too silly for words :) and i love the pig/madonna/child/blanket connection...very cleaver indeed :)

Awww, I love the piggies.

I remember the New Christy Minstrels singing a variation of the Pig Poem...they had some very funny stuff.

I copied your Pig poem and sent it to a fellow vegan and pig lover.