You know Jen runs Time Warp Tuesday, a chance to look back at old photos?

Our snows this past week, which are entirely typical and average for our winter--we get about 100 inches of snow a year,  reminded me and the wife of April 1992, shortly after we became an ITEM.

We lived in Chicago and that is surely a place also known for its winters (although a lot shorter and sunnier than winters in northern NY).  April of that year we had a monster snow storm, nothing unusual, and in the picture on the left you see me and the wife on the Northwestern University campus headed to a rather awesome art exhibit.  The picture of me is later in front of my apartment building on Briar St.
a)  I lived in an awesome spot then.  4 blocks from Wrigley Field, 4 blocks from Lake Michigan, the whole young Chicago world lived in this neighborhood! I was right by Belmont and Clark and Halstead. A million old buildings, bars, clubs, stores, groovy...shortly after I left the mayor designated that stretch of Halstead as "Boystown".  Aha!  That would explain all the ...well, anyway...
b)  the wife and I both developed severe bronchitis just after we took these pics and had fun in the snow.  We took it as a chance to read Vogue and do nothing for a day or 2....

You may need this groovy soap or snack dish, right?  I used shell molds to form this dish by hand and glazed it jade-turquoise, this and other items like candloe holders for sale now at my etsy gallery! 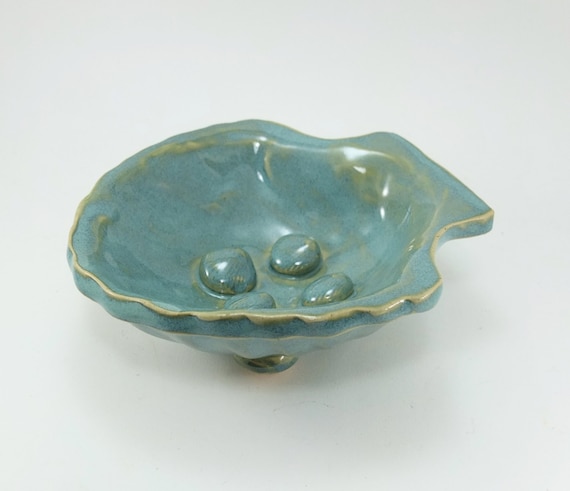 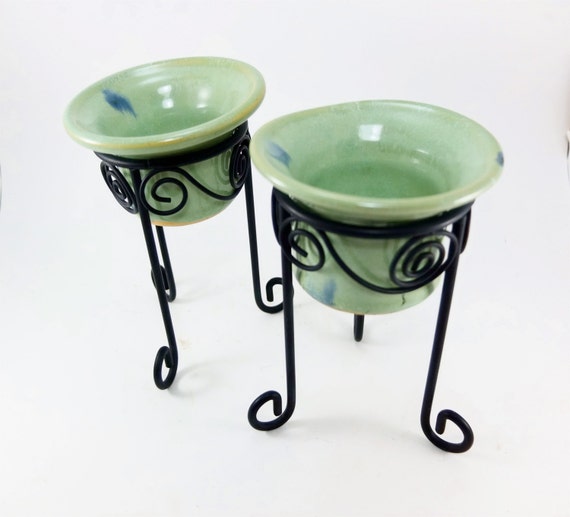 Posted by Gary's third pottery blog at 6:06 AM

All that snow and she's not wearing any gloves! I'm cold just looking at her.

I love Chicago--what a great place to live as a young person.

The one redeeming quality of an April snowstorm is that it melts quickly.
Lovin' those tea light holders!

Playing in the snow can be lots of fun, it looks like you all were having a good time.

Spike and Penney have such a good attitude! GOodness gracious, you all took pics of snow then got sick...and remembered it. I never remember things like that. (No comment here about my memory!) Yes we have some flowers in front of the library (and the little daffies in front of my porch) where it's south facing. Never have had snow stick a day yet this year.

You and your wife are such a cute couple!

I must say I was grateful for the snow dumped on Toronto as several winters have gone by with little of the stuff. There could have been a bit more!

You two look the same now!

I love those snapshots....as I love Chicago too! Of course, I've never visited in the dead of winter either. :)
Nice soap dish!