Ha!  You know Jen runs Time Warp Tuesday, right?  A chance to look back at your old snapshots?

Sure, I had a RABBIT in my dorm room when I was in college....this is Tex in 1986 when I was 20.  I had me some HAIR up there!
I love bunnies.
Recently we have been bingeing on Downton Abbey, munching on season one, yum yum!  There was a hunt scene, and the funny thing was, last week before I saw the hunt scene I was thinking about drawing FOXES and I did so...but what I thought would be funny is if the BUNNY chased the fox, and oh what the hell, the fox chases the hound....round and round my bowls, below, as you see....

Another point about Downton Abbey.  I have a photo on my desk of a GUY WHO LOOKS LIKE me holding a microphone over a kitchen scene from, what, 1914?  The kitchen is full of pretty handmade pots from that era, that and the contrast of the modern dude with the mic cracks me up. 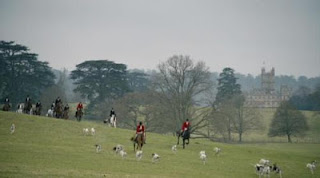 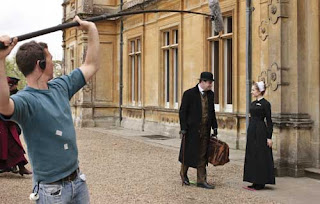 Speaking of BUNNIES from England, eh wot?
Posted by Gary's third pottery blog at 8:36 AM

Tex is adorable.. and look at baby face you!

Bunnys need some revenge don't they?
So cute!
Downton Abbey is awesome; enjoy.

Ha! Love the hair and the bunny! Downton Abbey is marvelous...all seasons. You will enjoy. HGTV also did a piece on the castle they are filming at which was interesting.

Now I want a bunny!

A friend had a bunny when we were in grad school - so fun. Love the youthful version of you!

Cuteness all around!
Darn good fox, too. :)